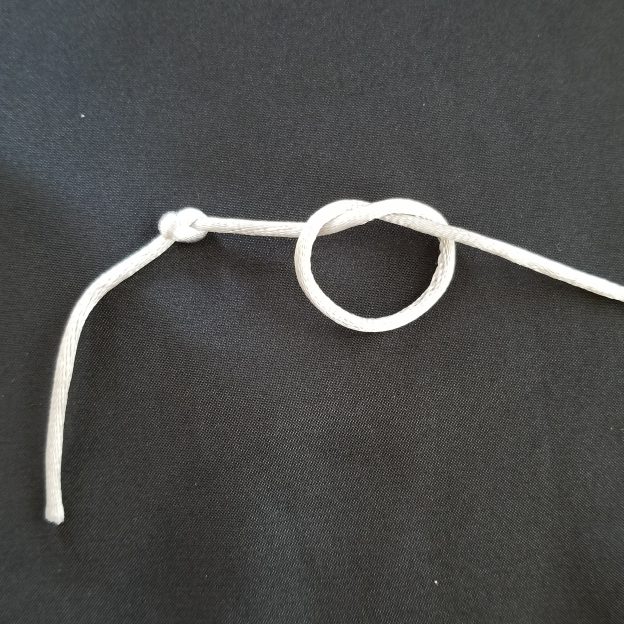 Lunar knot magick, like traditional knot, or cord magick is a simple, yet extremely effective magickal practice. It requires little in the ways of tools, just a simple piece of rope, string or cord, usually made of natural materials. In this article I will show how to gather and capture the moon’s energies using lunar knot magick.

You may already be familiar with knot/cord magick. If so, you will notice that what we are going to be doing here today is a bit different than what you may have been shown before. Usually the knots are created to hold the magick until a spell has manifested. We are instead using a technique whereby the power of the moon is pulled into and held by each knot placed in your cord. As the particular lunar phase energies are required, you release a knot to let loose the energies stored within.

This application had been used by sailors and sea faring peoples for generations. In times past the captains of the ships nay have gone to the local cunning woman or witch to have them create a knotted cord for to carry with them on their voyage. Each knot represents winds pulled in and captured within. This cord would remain on ship, waiting until such a time as the winds calmed, rendering the sailing ship immobile. It would then be produced and a knot would be released, allowing the wind to escape. They would continue releasing the knots until the winds would gain fill their sails.

To create your lunar knot magick you will only require two items:

Cut your cord to a length appropriate for the number of knots you will be placing in your cord. Simple knots will take less cord than say an elaborate nautical knot. In the example shown I used a 27 inch cord to hold nine simple knots.

Take your cord out with you on the night of the full, dark, or new moon – depending on the energy attributes you wish to collect. You may cast circle of you’d like but it isn’t necessary for this endeavor.

Place your cord on a flat surface such as a table, bench or altar. If you are working with a full moon, try to place the cord in such a way that the light of the moon touches it. This adds an extra but of “oomph” to the working but even if it is cloudy the energy is still there.

Raise your hands towards the moon (in whatever phase it may be) and “gather” the energies. See the light (or darkness) of the moon filling your hands. When they begin to tingle and feel full, place your hands over the cord, filling it with the powers of the moon.

When I am doing lunar knot magick I like to make knots in multiples of 9. Nine has always resonated with me as the number of the moon and all lunar workings. You may have a different number in mind. As with all magick, use what resonates with you.

Taking your cord infused with lunar energy in hand, make your first knot. Tie the knots firmly, but not so tight that you will be unable to take them out later. As you make the knot, picture the energy being held tightly inside it. You may repeat a phrase or chant as you tie your knots. I have used the following with great success:

“Energies of the moon I hereby bind. Into this simple cord of mine. To stay until they are of need. To be released with focused speed.”

Repeat until you have made all of your knots. When completed, hold the now knotted cord up to the moon and say:

“This cord which I have fashioned this night, filled with magick, filled with might. May it ever serve me well until such time to break the spell.”

Place your cord in a small box or bag and place where it will not be disturbed until its energies required. Place a label on the inside or outside of the box or bag noting what type of lunar energies it holds. If you use different color cords for each type of knot magick, you may not need to so but I recommend it in order to save yourself the frustration of trying to recall what you created your cord for.

When you are in need of additional lunar energies or when you have a spell that requires a specific moon phase that you are not currently in, grab your lunar knot magick cord. While performing your spell hold your cord over the working. As you untie the knot or knots, (use as many knots as you feel is required for the working), say:

“I release the energies of the full (dark, new) moon into my working. May the powers of this lunar phase mix and mingle with my energies to create the outcome I desire.”

When the cord has been spent, dispose of it by burning, burying or cutting into small pieces then throwing it away. I do not recommend re-using the cord.

As you gaze out at the Full Moon this night, give Lunar Knot Magick a try. I hope that you will find it a special and powerful magickal ally.

Beneath the Triune Moon